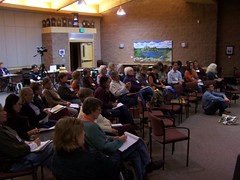 Most demonstrators are demanding that governments take action – governments that are bought and sold by the vested interests of fossil fuels and their profitable use. Governments get the job by default because most people don’t know exactly what they’re asking for. Whether they realize it or not, they probably conceive of it as the equivalent of switching out the gasoline engine in their car for a battery. The economy, they assume, will run on electricity, mostly, but will otherwise go on exactly as it does now.

This means electrifying everything with renewable energy, not just electricity itself but transportation, heating of buildings, and energy-intensive, high-temperature industrial processes, some of which can’t be done with electricity at all. That’s the direction we have to go in, but it’s a long reach. For the time being, all that new electrical infrastructure will have to be built using fossil fuels.

This country is now built on fossil fuels and can’t last a day without them. If the oil spigot was turned off tomorrow nothing would move. Food couldn’t get to the shelves, nor could the shoppers. New food could not be grown. It’s that basic.

So we start with a goal that’s currently an impossibility: Keep it in the ground! It’s time we got serious about this. Collectively, we’re amazingly nonchalant about continuing to burn oil, coal and natural gas. We can’t cut them off all at once, but their use will have to be strictly prioritized. This is not just an engineering exercise, it demands a reorganization of society.

Fossil fuels will have to be allocated through some kind of rationing based on fair shares and need.

Economic activity will also have to be allocated. What gets produced? Who decides, and how? The US operates a consumer economy in which consumers – private individuals – absorb 70% of production. Almost anyone would agree that a great deal of this is unnecessary. People’s livelihoods depend on overproduction and overconsumption, but there’s plenty of useful work to be done in making our buildings and infrastructure carbon-free.

If government won’t do it the people must. Politicians love to build things, have since the days of the Pyramids. Modern politicians take credit for development, ceremonially shoveling dirt and cutting ribbons. Development means growth. Since the mid-20th century it’s been economic and political religion that we must have material growth without end, preferably at a rate of at least 3% per year. This faith has been immune to the fact that our planet has limited resources and there’s nowhere else to put all the waste – greenhouse gases, plastic, toxic ash and sludge and other pollution of air, water and land.

The most we can expect from government is a Green New Deal that adds growth in renewable energy on top of all the other growth that’s already occurring in a growth economy. Most people work long hours to earn enough money to be able to buy what they collectively produce. The first step out of the ecological crisis this has created is for each of us to exercise our individual power. Opt out of consumerism! In a consumer economy, that is real power.

If government won’t lead the way from the growth economy to a sustainable way of life, it will have to be done by citizens’ assemblies of the kind proposed by Extinction Rebellion. Their legitimacy can only come from widespread participation and support. This is where truly democratic decision-making can take place. Membership in an assembly could be chosen by lot to ensure that interest groups or self-appointed experts don’t dominate. Democracy won’t work without more people being involved in making decisions, starting at the most local level. Otherwise a “reality” TV star gets elected president.

The following areas are at the top of the priorities list.

Energy. Energy efficiency, wind and solar are low-cost, mature solutions, but replacing fossil fuels is not that simple. Making cement, steel and other ingredients still depends on industrial heat that can’t be achieved with electricity, at least not yet. Electronics, including batteries for electric vehicles and energy storage, use minerals that are rare or that don’t occur in concentrations that can readily be mined. Using less energy overall is desirable and inevitable. Energy conservation comes first, then efficiency, then renewable electricity. Needless uses of energy must be identified, agreed upon and cut out.

Agriculture. Industrial agriculture is hopelessly enslaved to fossil fuels, not only to run the huge tractors and combines and get the crops to processing plants and stores, but as feedstocks for pesticides, herbicides and ammonia fertilizers. These fertilizers are made with natural gas and, after being applied to the fields, release nitrous oxide (N2O), a greenhouse gas 298 times more potent at trapping heat in the atmosphere than CO2.

Agriculture will need a more diverse mix of plants raised in ways that at least resemble functioning ecosystems. Huge corn and soy operations that substitute oil and chemicals for human and animal labor are unsustainable.  Farms will have to get small or get out. We will need a lot of new farmers. This, along with making buildings more energy-efficient and solar-powered, is our jobs program.

We have to eat less meat. Too much land is used to raise livestock and the plants that feed them, crops that could be replaced with food for us to eat directly. Reforestation programs are needed to reclaim land and draw down carbon from the air. Car-dependent suburbs are good for nothing but conversion to farms, woodlands and wetlands.

Essential public services need to be preserved but reformed – first responders, clean water, health care, defense, public transit and a long list of others. The military is so bloated and the health care system so wasteful that they can easily cut their greenhouse gas output. Public transit and freight rail will have to expand to replace individual cars and trucks. Supply lines will have to get shorter.

Unfortunately, a lot of resources will have to be spent on responding to emergencies – climate disasters, climate-driven migration, and violent insurrection from people unwilling to let go of the high-energy, fossil-fueled way of life. Change this thoroughgoing won’t happen without displacement and strife. It will get ugly.

Can this be done? Highly unlikely, but we have to start and get as far as we can in the race against time.

Henry Robertson is an environmental lawyer and activist in St Louis and a member of the editorial board of Green Social Thought.