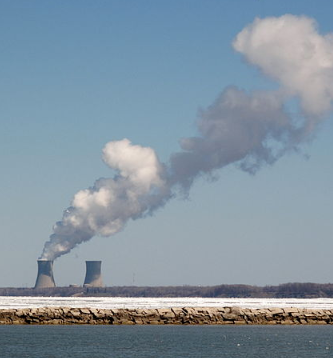 The nuclear industry's violent assault on democracy in Ohio has taken a surreal leap. It could seriously impact whether Donald Trump will carry this swing state—and the nation—in 2020.

Ohio's GOP secretary of state has now asked the Ohio Supreme Court NOT to provide a federal judge with answers about key procedural questions surrounding the state's referendum process.

The short-term issue is about a billion-dollar bailout for two nuke reactors and two coal burners.

Long-term it asks whether targeted violence perpetrated by paid thugs will now define our election process. And whether the public referendum will remain a workable part of our democracy.

HB6 forces all Ohio ratepayers to subsidize two crumbling nukes on Lake Erie, along with two decrepit coal burners, one of them in Indiana. It helps underwrite ten small solar farms, but undercuts much larger subsidies for other wind and solar facilities.

The Perry reactor east of Cleveland, and Davis-Besse near Toledo, are among the world's most dangerous, decrepit reactors. Both were set to shut because they cannot compete with wind and solar, as well as fracked gas.

But Akron-based FirstEnergy spent millions to "persuade" the legislature to hand them a billion dollars to keep their uncompetitive, uninsured and essentially unregulated reactors on line.

When the bailout passed, a statewide group called Ohioans Against Corporate Bailouts turned in a petition for a repeal referendum on the 2020 ballot. The law allows 90 days for referendum sponsors to gather signatures to get on the ballot. In this case 265,711 would be required.

Ohio's Attorney General David Yost sat on the request for 19 days, then rejected it. OACB filed a second application, which the AG sat on for another 19 days before approving it.

That left the petitioners just 52 days to gather signatures.

But signature gatherers were immediately attacked with violent threats and bribery offers. In the field, they (and potential signatories) were physically assaulted by "blockers" hired by the nuclear industry. Sworn testimony about these attacks was filmed at a public gathering in Columbus and can be seen here: https://freepress.org/article/free-press-second-saturday-petition-blockers-threaten-our-democracy

Bailout opponents then went to federal court to ask that the 38 days consumed by the AG be restored to the petition campaign, which came up short at the 90-day deadline.  A federal judge asked for guidance from the Ohio Supreme Court and submitted five questions for the Justices to answer.

And here things have leapt to another level. Frank LaRose, the Ohio Secretary of State, has now asked the Ohio Supreme Court NOT to respond to the federal judge's queries.

In other words: the Republican attorney general killed nearly half the allotted signature gathering time for the repeal of this bailout. A federal judge has asked to hear from the state Supreme Court. And now Ohio's Republican secretary of state has asked that Court NOT to comply, in a direct attempt to prevent Ohioans from voting on whether they're to be forced to pay a billion dollar subsidy for two lethal, money losing atomic reactors.

This shocking combination of overt threats, bribery and outright physical violence, combined with judicial stall tactics by elected Ohio officials, breaks new ground in the assault on democracy itself in the American heartland.

The issue cuts to the core of the 2020 election. Donald Trump has met personally with at least one principal lobbyist for FirstEnergy, the prime beneficiary of the bailout. At least one of his associates lobbied at least five legislators in its behalf.

But a statewide referendum for repeal could be catastrophic for the GOP. Polls show more than 60% of Ohioans opposed. That includes much of the normally corporate statewide media. Many big industrial organizations have joined the fossil fuel industry here in fighting it.

If the referendum does get on the 2020 ballot, it will clearly energize a strong progressive voter turnout. Outraged ratepayers could very easily make the difference in a closely divided swing state. So for Trump and his minions, killing a vote on this billion-dollar rip-off is vital.

Their assault must be seen as part of a larger attack on democracy itself. The right to referendum has been established in numerous states for a century or more. That physical violence, choreographed bribery and official legal manipulation would now be used to kill it bodes badly for our future.

From the rise in violent white supremacist bigotry, to unaccountable police murders, to Charlottesville, to the recent attack on Code Pink's Medea Benjamin to the concerted Republican assault on paper ballots and fair, inclusive voting practices, it's clear the GOP intends to gut democracy in 2020 and beyond.

This all-out utility and official attack on the referendum process in Ohio has put a billion-dollar price tag on two nukes capable of doing trillions in damage to human health and the eco-systems of the Great Lakes region.

But it also signals a broader war against both democracy and truth, one we must all take very, very seriously.

Attorney Bob Fitrakis, Ph.D., is publisher of the Columbus Free Press. He's co-author of THE STRIP & FLIP DISASTER OF AMERICA'S STOLEN ELECTIONS (at freepress.org) with Harvey Wasserman, whose PEOPLE'S SPIRAL OF US HISTORY is at solartopia.org.