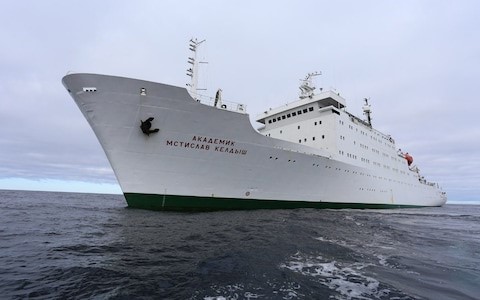 Global warming is on speed, especially in northern latitudes where an international team of scientists led by Igor Semiletov of Tomsk Polytechnic University, Russia’s oldest technical institution, recently made a startling discovery aboard the Academic Mstislav Keldysh (see photo above), the kind of discovery that sends chills down the spine, i.e., “methane bubbles boiling in water.”

According to Semiletov: “This is the most powerful seep I have ever been able to observe… No one has ever recorded anything similar.” (Source: Research Vessel Encounters Giant Methane Seep in Arctic Waters, The Maritime Executive, Oct. 10, 2019)

That’s bad news for the entire world community. The East Siberian Arctic Shelf hasn’t been on the radar of mainstream science for years, but only recently the global scientific community has come to realize the inherent danger. After all, the massive continental East Siberian Arctic Shelf is the size of Germany, France, Great Britain, Italy, and Japan combined, and it is jammed full of methane buried at sea beneath underwater permafrost. But, it’s starting to leak big time, and this could be one of the biggest problems of all time for civilization, with staggering consequences.

The scientists were able to scoop up buckets full of bubbling methane from within the five square meter hot spot. The next day the expedition discovered another giant seep in the same region. The air in the vicinity registered methane concentrations of up to 16 ppm, which is 9 times the background rate. Semiletov said it is the “highest ever registered for a seep at sea.” He’s explored the Arctic forty times.

One of the risks of bursting methane at sea is damage to oil and gas infrastructure with results similar to the Deepwater Horizon accident in the Gulf of Mexico. So far, Russia has only one offshore drilling rig in the Arctic. In August, Russian state-owned Rosatom launched a floating nuclear power plant to power the gold-mining outpost of Pevek, located on the coast of the East Siberian Sea. Russia has plans to install seafloor nuclear power units for additional Arctic development.

Yet nobody knows for certain the risks associated with methane seafloor bursts, which, horror of horrors, could result in undersea formation of something akin to the infamous Yamal craters found on land, i.e., imploding Pingo craters. It’s not a stretch of the imagination that all hell breaks loose in the harsh Arctic environment in the face of oil & gas offshore drilling, especially with nuclear power plants at sea. Honestly, it leaves one almost speechless!

Additional SOS signals have been detected in the Barents Sea, which is located above Norway and extends over Russia, flowing into other Arctic seas—Kara, Laptev, and ultimately the East Siberian Sea. Dahr Jamail’s fascinating book The End of Ice tells an ominous story of methane bubbling at sea.

In Barrow, Alaska, he met Ira Leifer, a scientist who studies the shallow seas of the Arctic and works with NASA on methane data. Leifer discovered wicked SOS signals coming from a 620 square mile area of the Barents Sea jam-packed with methane bubbles at the rate of 60 million plumes, which is almost impossible to fathom as the normal background rate should be thousands, not 60 million.

“He found a ‘hot spot’ of roughly a thousand square kilometers that contained a staggering 60 million methane bubble plumes.” (Dahr Jamail, The End of Ice, The New Press, 2019, pg. 196).

As it happens, the Barents Sea gets more volume of warmer mid-latitude waters from the Atlantic than any other Arctic sea; thus it is the key portal to the flow of warm waters across the Arctic seas of Kara, Laptev, and the East Siberian. What happens in the Barents does not stay in the Barents, and based upon Leifer’s discovery, it is sending perilous signals for all of the adjoining seas.

All of which holds especially true for the shallow seas, as for example, Leifer cautioned Jamail: “The East Siberian Sea is a huge shallow sea… So any methane there is going to get out, same with terrestrial methane from permafrost,” ibid, pg. 195.

Thereafter, Jamail discussed the work of Natalia Shakhova, who was formerly the head of the International Arctic Research Center at the University of Alaska. She has done seminal work on the East Siberian Arctic Shelf. Her research indicates that enormous bursts of methane could occur at any time as the subsea permafrost is rapidly thinning. She has discussed the potential of a 50-gigaton burst, although it is very controversial within the scientific community. It would equal 1,000 gigatons of CO2.

The consequences of such a burst “may cause an approximately 12-times increase of modern atmospheric methane burden with consequent catastrophic greenhouse warming,” ibid, pg. 198.

Catastrophic greenhouse warming speaks for itself, as mid-latitude agricultural regions of China, India, and the US Midwest would turn to dust and the tropics and the Middle East turn uninhabitable. Leifer, for one, believes we’re already near a point where large portions of the Middle East will be uninhabitable because temperatures will be beyond human tolerance.

Meanwhile, carbon dioxide emissions from fossil fuel sources hit a record 37 gigatons in 2018, nearly doubling the annualized rate over 2017 (World Resources Institute). That alone is an ominous signal that could shake, rattle, and roll the shallow seabed of the East Siberian Arctic Shelf region where 15–20% of the worlds’ methane is frozen in time, so far. It’s a dormant monster that could turn the world upside down.

Meantime, the world’s synchronized experiment with rampant galloping High Capitalism treats ecosystems of the earth like throw-away Dixie Cups. A huge crack is starting to appear in Earth’s crust from pole to pole as it comes apart at the seams. Infinite growth is the greatest illusion of all time, as the formula does not work very well for Gaia, which has already reversed course downwards towards surefire darkness and chaos.

James Lovelock, the father of the Gaia theory, during a BBC 2019 interview said: “There is a real danger of losing our tenure on the planet altogether… what happens to the planet when more CO2 is put into the air? The earth will get hotter. It will heat up to a point where no life on it of our kind will be possible.”

What to do? Become an eco warrior and fight the system, same as Extinction Rebellion/UK, because the current state of affairs can’t handle it on its own.