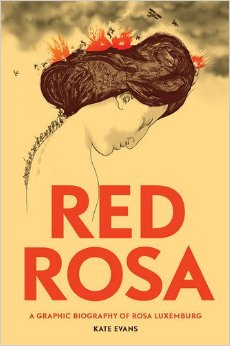 A review by R. Burke of Kate Evans' Red Rosa; A Graphic Biography of Rosa Luxemburg.

When the Cold War ended many shortsighted, and ill-informed people thought we had reached the end of history, and that Capitalism had triumphed, Socialism had failed. Today, after the events of the first 15 years of the 21st century, that triumphalism rings hollow. What actually happened was that history had decided in what had long been an argument between various competing versions of Socialism. What were the alternatives that were overlooked, who were the people proposing them? Kate Evans’ wonderful production Red Rosa; A Graphic Biography of Rosa Luxemburg provides an introduction to a figure of monumental proportions whose stature and importance can only continue to grow.

Ms. Evans has created a masterpiece that displays a detailed examination of some of Luxemburg’s political thinking balanced with an in-depth exploration of her life. She manages to skillfully balance the personal and the political in a way which does not fall into the extremes of  either pedantry or gossip. We are provided with a picture of Rosa Luxemburg as a whole person, one that allows us to glimpse the poetry animating the critical thinking. At one point in the book having described some of the heroine’s love affairs, Ms. Evans wisely chooses to discontinue detailed descriptions of these and to focus more on the political side of the equation. “To pay her due credit as a woman grown to maturity we could cease constructing her identity solely through the tired old trope of romance,” writes Ms. Evans.

Red Rosa describes the circumstances behind Rosa Luxemburg’s upbringing as a Jewish girl in Poland, at a time when that country was still apart of Russia. Born with a congenital hip displacement, Rosa would walk with a limp for the rest of her life. Her father was a businessman who, due to restrictions placed upon Jews in that place and time, was struggling without much success. Showing great intellectual gifts Luxemburg rebelled against the constraints placed upon her by Polish society due to her gender and ethnic identity. Ironically, one place where she disagreed strongly with Marx was on the question of Polish independence. For Marx Polish independence was a cause of urgent importance as articles written by himself, and with Engels, in 1875-1876 attest. Luxemburg however rejected the idea, already suspicious of nationalism’s power to divide the working class. She instead advocated for a fully Socialist internationalism. In a world increasingly fractured along lines of religion and ethnic identity, perhaps it would be wise for those of us in the World Left to embody a bit more of this spirit.

Ms. Evans depicts Rosa Luxemburg’s rebellion against unjust authority, her sense of compassion for the wretched of the earth. These lead her at the age of 15 to join the growing Socialist movement. This was a courageous choice in Poland in the late 19th century, a time when socialists were being hung in an attempt to deter the growth of the movement. Eventually her activities lead to exile, as she was forced to escape to Switzerland. Later she obtained German citizenship, and became a member of the Social Democratic Party, then the largest and most powerful socialist party in the world.

One of the strengths of Red Rosa is its’ ability to convey Luxemburg’s ideas with clarity and relevance. The controversy with Edward Bernstein, as what is possibly her best-known work Reform or Revolution documents, is depicted Particular attention is paid to her book The Accumulation of Capital. We are shown how Rosa Luxemburg attempted to complete Marx’s unfinished critique of Capitalism in Capital. Long before terms such as ‘globalization’ were coined Luxemburg recognized how the logic of   Capitalism forced it to expand and encompass the globe. This is a prescient insight for us today as we approach what appears to be the completion of this project and the miserable consequences this is imposing on the human race. Rosa Luxemburg took seriously the slogan of Socialism or Barbarism, which made her particularly opposed to war and imperialism.

This perspective, along with her strong Socialist internationalism led her to be one of the few voices opposing the SDP against supporting Germany’s war effort in World War One. Along with figures such as V.I. Lenin, Karl Liebknecht, and ironically, Jean Jaures, her French antagonist over questions of Socialist involvement in Non-Socialist governments, led Rosa Luxemburg to increasingly come into conflict with SDP leadership.

When the Bolshevik Revolution broke out in Russia Luxemburg was largely supportive and became one of the founders of the German Communist Party. Yet her support was highly critical; she criticized what she identified as the suppression of democracy in the fledgling U.S.S.R. For Rosa Luxemburg political democracy was essential to socialism, and there could be none without it. Her stance on this issue provides guidance on the question of how to relate to ‘actually existing socialist’ regimes; in which sympathy for attempts to build socialism is coupled with critical thinking about those efforts.

With the German defeat revolution broke out in Germany as well. While pessimistic about the chances of success due to lack of support from the masses, Luxemburg nonetheless stood by her comrades. In and act of betrayal which remains infamous to this day the SDP government which took power after the Kaiser’s abdication worked to suppress the revolution. Like Jaures, who was assassinated due to his refusal to support French entry into the war, Luxemburg was herself kidnapped and murdered by the Freikorps, a precursor group to the Nazis. Her body was dumped in the river.

Ms. Evan’s artwork is skillful. She creates a recognizable graphic image of Rosa while managing to convey shades of emotion that were probably never captured by photography. While she has to take some small liberties with the facts, such as making Luxemburg’s cat Mimi as a symbol for all the various pets she had in her career, Ms. Evans also provides a section of notes where she indicates historical facts, and gives attribution to her sources. An afterward by Paul Buhle provides an account of how Luxemburg’ political influence has continued in the years after her death.

That influence remains lively still and will likely spread further, thanks in part to this remarkable graphic biography. In one of letters, Rosa Luxemburg said: “I want to effect people like a clap of thunder, to enflame their minds with the breadth of my vision, the strength of my conviction, and the power of my expression.” If the World- Left ever manages to adequately embody her spirit, a storm would indeed be brewing.