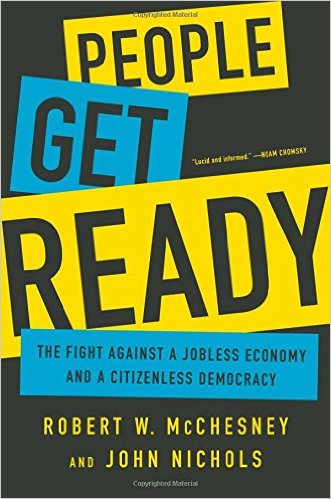 In their new book People Get Ready; the Fight Against a Jobless Economy and a Citizenless Democracy Robert McChesney and John Nichols contemplate a coming scenario which had been foreseen by Karl Marx in the Grundrisse, his posthumously published outline for Capital: “but to the degree that large industry develops, the creation of real wealth comes to depend less on labour time and on the amount of labour employed than on the power of the agencies set in motion during labour time, whose ‘powerful effectiveness’ is itself in turn out of all proportion to the direct labour time spent on their production, but depends rather on the general state of science and on the progress of technology…labour no longer appears so much to be included within the production process; rather, the  human being comes to relate more as watchman and regulator to the production process itself…as soon as labour in the direct form has ceased to be the great well spring of wealth labour time ceases and must cease to be its measure…”(1) In the past the economics profession has rejected such predictions, claiming that as technology advances new fields of employment would be opened up. Increasingly there is evidence that this may no longer be the case. As automation proceeds fewer jobs become necessary, and those that remain tend to pay less.

McChesney and Nichols begin with a survey of recent developments in technology and its effects on employment. “In 1988, one hundred years after it’s founding, Kodak employed 145,000 people. But history, innovation, and a record of treating workers like human beings was no match for the new age of cell phone communication and instantaneous photo-sharing tools such as Instagram… by 2015 the total number of Kodak workers was less than 5 percent of what it was just a quarter century earlier.” Referring to the recent words of Google chairman Eric Schmidt they report that he “acknowledged that due to rapid advances in technology, including some of the projects Google was working on, countless middle-class jobs that had seemed beyond the reach of computers and automation were going to be at risk in the near future. More and more middle-class workers were going to lose their jobs and there was little on the horizon to suggest there would be new jobs for them. This would be, according to Schmidt, the “defining” issue of the next two to three decades.” The authors back up their position with numerous statistics demonstrating that, as automation and technology have continued to advance, there has been greater unemployment and a decline in labor force participation; meanwhile profits per employee and income shares of the wealthiest have increased. Globalization and offshoring have undoubtedly played a role in exacerbating these trends; McChesney and Nichols show however that even the low wage zones of the less developed countries are not immune to the technological onslaught. “In 2010, world attention shifted to Foxconn’s factories that produced Apple products following a string of suicides by its workers. Soon thereafter Foxconn began an aggressive program to eventually replace many, or most, of its workers with one million robots.” Citing a recent New York Times article headlined “Cheaper Robots, Fewer Workers” the authors quote that: “so although building robots to replace workers is seldom cheap, a growing number of companies are finding it less costly than paying ever-higher wages in China or moving to another country.” When automation becomes cheaper than offshoring, the consequences for workers become grim.

The authors are far from being luddites and in fact celebrate the potentially liberating effects of the new technologies. Their concern is directed instead at the political and economic arrangements that allow the benefits to accrue to those at the top of the income scale at the expense of workers and citizens. As these technological trends have proceeded, recent decades have seen an undermining of the ‘democratic infrastructure’ that allows citizens to respond appropriately to these developments. A major factor in this situation has been the promotion of the ideology of neoliberalism, with its fetishizing of the “free market’ and the denigration of government as the source of our collective problems. Since the 1970’s both the Democratic and Republican parties have accepted this ideology, and have promoted policies derived from the neoliberal worldview. McChesney and Nichols argue that this ideological offensive was carefully promoted by the capitalist ruling class as a response to the ‘crisis of democracy’ resulting from the social movements of the 1960’s and early ‘70’s. As a result economic doctrines that had once been considered marginal and extreme have come to dominate public discourse. The objective was precisely to undermine and disillusion potential opposition to the schemes of the ruling class, in a word to foster what the surrealist movement has termed miserablism.

Far from succumbing to miserablism, the authors find much reason for hope, especially in looking back at similar periods in US history. They demonstrate that a concern for fostering the public good and checking the power of economic elites, however imperfect, has been a recurring theme since the founding of the country. The Progressive and New Deal eras in particular are a point of reference for McChesney and Nichols. They point to the recent, and growing concern about economic inequality as a reason for optimism regarding the future.

While People Get Ready is invaluable for making the case regarding ongoing trends relating to technology and employment, as well as for fostering an optimistic mindset about the possibilities for progressive change, one area in which they fall short is in providing practical proposals for dealing with our current dilemma. The idea of a guaranteed income is dismissed in a cavalier fashion, the authors laboring under the fallacy that it was first posited by left wing proponents in the 1960’s. Correctly recognizing that there are also right wing advocates of the idea, they then proceed to set these up as a straw man to knock down without even attempting to engage with the more progressive versions of this proposal. Instead the authors argue vaguely that “a more humane approach would be to go in the opposite direction and simply remove certain functions from the market altogether as the society grows wealthier,” without explaining how this would work, in what way it differs from previous social-democratic welfare-state reforms, how this reduces unemployment or why doing so would be mutually exclusive with a guaranteed income.

To begin with, anyone familiar with the history of socialist thought beyond a narrow focus on the Marxian current is aware that socialists from the beginning of the movement have advocated for some form of a guaranteed income. Early utopian socialists such as Charles Fourier and Pierre-Joseph Proudhon made it part of their schemes for social reform. Edward Bellamy’s 19th century classic Looking Backward depicts a society in which the means of production are publicly owned, and each citizen receives a guaranteed, indeed equal, income. George Bernard Shaw in The Intelligent Woman’s Guide to Socialism also argued for a guaranteed share of equal income for everyone, which for him was the very definition of socialism. In Bertrand Russell’s Roads to Freedom he advocated that “a certain small income, sufficient for necessaries, should be secured to all, whether they work or not”(2) along with Guild Socialism, and germane to McChesney and Nichols’ argument, he called for the free distribution of products that society produced in abundance as a long term goal. The suggestion that guaranteed income proposals are a right-wing idea adopted by leftists in the 1960’s is demonstrably wrong, and the truth is rather the other way around. Ironically, one advocate for this measure who comes from the Marxian current is conspicuous by his absence: Andre Gorz. Indeed it was Gorz who linked guaranteed income proposals to a demand for the progressive reduction of working hours precisely in response to increasing automation, pointing out that this would allow everyone to work, but to work less. Clearly McChesney and Nichols did not do their homework on this issue!

That aside, People Get Ready the Fight Against a Jobless Economy and a Citizenless Democracy, is of major importance. The authors call attention to technological trends, and their impact on employment, which many on the world-left have been ignoring to their political peril. The book is well researched, backed up with statistics, and full of important historical insights that counter the prevailing cultural trends toward miserablism. For that, Robert McChesney and John Nichols’ new book deserves to be widely read.