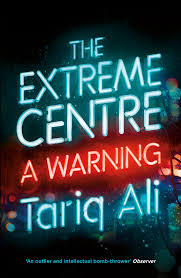 A review by R. Burke of Tariq Ali's The Extreme Centre: A Warning.

Debates about "reform versus revolution" on the Socialist Left are by now more than a century old. Yet it seems that the political climate at this time is one in which even the revisionists of the German Social Democratic Party of Germany in the early 20th century would be considered to be "too radical" to be taken seriously as a political alternative! How have we come to a point where even ‘socialist' and ‘labor' parties are loathe to pursue even the most mildly social-democratic policies, and instead willingly embrace the dogma of austerity? Tariq Ali examines all this in his new book The Extreme Centre: A Warning.

Long a figure on the British Left Ali, born in Pakistan, came to prominence with the Vietnam War protests of the 1960's, is the inspiration behind the Rolling Stones song "Street Fighting Man" and John Lennon's "Power to the People." He also had a cameo role (along with Regis Debray and Robin Blackburn) in "Gimmie Some Truth" a documentary about the making of the song "Imagine." Strongly influenced by Trotsky- he has been known to say in interviews that he is "Trotskyish" rather than "Trotskyite"-Ali is one of the founding editors of New Left Review.

Ali sees democracy as being in serious trouble in the U.S. and Europe. Parties that at one time worked to restrain the ill effects of capitalism on society now work to impose pain on the poorer and less powerful in the name of defending that same economic system. This is coupled with an environment in which the concept of "Centrism" becomes fetishized as the fount of wisdom, and is touted as the key to political success. Both conservative and left wing parties thus collude to maintain a neoliberal world order.

The current British Labor party is a major target of Ali's critique. In the 1940's, despite being a firm ally of the U.S. in the Cold War, Labor was nonetheless able to achieve admirable reforms including the creation of the National Health Service and the nationalization of certain industries. Today they compete with the Tories over how much to privatize these services, including the NHS! The government of Tony Blair comes in for especially sharp treatment in the book. Not only has he been responsible for ‘New Labor's" retreat on its social-democratic commitments, but for his disgraceful involvement in the war crime known as the Iraq War.

Serious challenges to the status quo have arisen though, in particular the recent election regarding Scottish Independence. Here we saw the Labor party, supporting a policy of austerity, in alliance with the Conservatives to preserve the status quo. Major issues in the campaign were the Scottish public's opposition to neoliberalism and support for social democracy, as well as opposition to nuclear weapons and NATO membership. As a result the Scottish National Party, having lost the independence vote, has now become the leading party in Scotland, taking over seats that were once solidly Labor and contributing heavily to it's recent electoral defeat.

In a chapter entitled "Euroland in Trouble" Ali investigates the European Union and it's response to the financial crisis of 2008. Having joined the European Monetary Union, countries such as Greece, Spain and Ireland now find that membership being used to impose harsh austerity measures that, even from a purely capitalist perspective, have little chance of success in reinvigorating their economies. Under the guise of "Centrism" and the ideologically paramount goal of maintaining and extending the Neoliberal world order, even the most orthodox Keynesian measures to stimulate economies are considered to be unthinkable. Here Ali sees some hopeful signs, such as the emergence of new political forces such as Podemos in Spain, but he is justly critical of Left thinkers such as Jurgen Habermas and Antonio Negri who have acted as cheerleaders for the EU, promoting the illusion that it is anything but a mechanism for promoting the interests of the upper classes (Negri, who was once closely associated with the Autonomia movement in Italy in the 1970's, is particularly disappointing in this regard).

One chapter in The Extreme Centre is devoted to an examination of NATO and it's current role as global military enforcer. Once justified by its' members as a necessary means of defense of Western Europe from ‘soviet aggression,' after the Cold War ended a new excuse for the alliance had to be found. Thus it was repurposed, via ‘humanitarian intervention' in the Kosovo war, as a force which could actively intervene in areas beyond the borders of its' member states.

In regards to the United States Ali is critical of certain left-wing commentators who emphasize the decline of the U.S. as a world power. At first glance one might think that he is thus taking issue with the kind of World Systems Analysis practiced by writers such as Immanuel Wallerstein or Samir Amin who analyze the decline of American power. A closer reading though reveals that Ali recognizes the decline of the U.S. politically and economically, but that his critique is aimed at those who predict that a decline in military terms is somehow immanent. The U.S in his view is likely to remain the predominant military power for the next few decades. His point is well taken, and one might add that when a hegemonic power begins to decline it has a tendency to attempt to preserve its' dominance through military means. As Wallerstein points out, military power is always the last to be lost.

Underlying all these seemingly separate issues Ali traces the hidden connections that bind them into a whole. Neoliberalism and its' dogmas are have become the new political center, and both center-right and center-left rally in defense of Centrism as the reasonable course between the "extremism" of both the Left and Right. Centrism, which promotes itself as the avoidance of extremes, thus itself becomes extreme. Center-Left and Center-Right collude to maintain the status quo. It is revealing that Margaret Thatcher considered Blair's "New Labor" to be her greatest political achievement.

The situation is not completely bleak, and Ali points to encouraging signs of a growing resistance to the extreme center. Since the book was published events have moved quickly. Syriza, which Ali saw as a hopeful possibility, he has since harshly criticized for its' capitulation to the demand for austerity by the ‘Troika,' rather than planning for the exit of Greece from the Euro. Ironically, given the harsh treatment of the Labor party in the book he has pointed to the recent election of Jeremy Corbyn as Labor party leader as another hopeful development in recent interviews.

The Extreme Centre: A Warning ends with a quote from Lenin in 1913, in which he warns: "Oppression alone, no matter how great, does not always give rise to a revolutionary situation in a country. In most cases it is not enough that the lower classes should not want to live in the old way. It is also necessary that the upper classes should be unable to rule and govern in the old way." Ali comments that: "We live in a very different world on many levels, but what the Russian revolutionary wrote a year before the outbreak of the First World War remains apposite." Tariq Ali's book The Extreme Centre; A Warning is a useful tool for disabusing oneself of the notion that Centrism is always the most reasonable and realistic of political options. Reading it is an important act of intellectual self-defense.