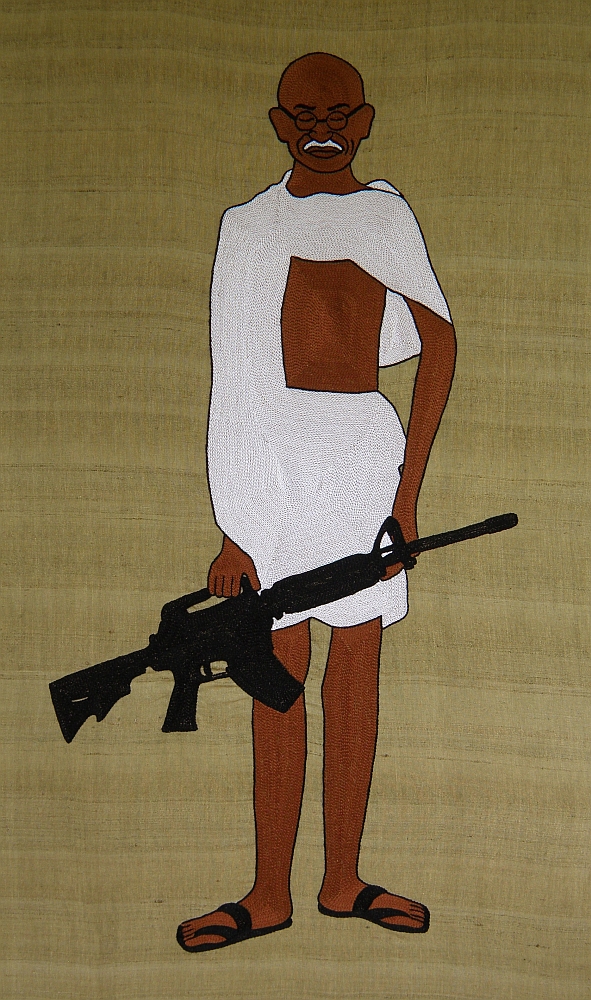 In the United States of America it’s all about the quantity, not the quality, of so-called freedom. That may be because only a few powerful lobbyists and the media control freedom’s meaning and its distribution.

This low-quality, surplus, unhinged freedom in the hands of a few comes with a price and color-coded tag attached to it, and too few of us can actually afford it. In this country, freedom serves the arms that link violence and capitalism, not the arms that link us together in solidarity for social, political, racial, economic and ecological justice.

Today, whether in the name of the War on Terror, or hiding behind an outdated 18th-century amendment, the white arms gesticulating this freedom are those of war profiteers and exploiters, or members of a desensitized citizenry. Either way, they are self destructing, and in the process are taking us and the planet down with them.

What does it mean to be free in the Land of the Free?

Here’s a sample of what freedom means in the heart of America: Salina, Kansas, not very far from the Wichita offices of Koch Industries. Our local school was planning to participate in the nationwide March 14 walkout, but a student who had been organizing the event told friends that maybe they should call it off. She was afraid that somebody might seize the moment to shoot up the gathering, and she felt responsible for her fellow classmates.

And what does it mean to be brave in the Home of the Brave?

She and the other students did the walkout despite the possibility of being shot up by one of their own in the Land of the Free.

Resistance to violence in this country started well before the Marjory Stoneman Douglas High School shooting. Our countless victims of poverty, racism, Islamophobia, police brutality, anti-immigration, anti-women, xenophobia, and homophobia will tell you that. And it was just a matter of time before anti-everyone-ism would creep in, thanks to the white superiority complex that has gripped the nation and given us laws with names like “Stand Your Ground” and euphemisms like “collateral damage” in order to maintain the status quo.

Now that anti-everyone-ism is in the mix while violence is exercised legally, it has caught the media’s eye and rendered our politicians and our “freedom lovers” a little more fidgety and defensive. But nothing more. It seems we are incapable of seeing the disease of macho white injustice, be it social, political, racial, economic or ecological, and are still pruning away at symptoms like gun violence and “mental health.”

Our very own first-term member of Congress from Kansas’ First District, Roger Marshall, who boasts that his track record includes delivering “more than 5000 babies, giving him a deep appreciation for the sanctity of life” and sucks up to Donald Trump like it’s going out of style, said this after the Stoneman Douglas shooting:

“After reflecting on the tragedy last week, I can’t help but think what if? What if teachers, coaches, or authorized personnel had the opportunity to carry their concealed weapon on school grounds, how would that have changed the outcome in Parkland, Florida? I stand with the president on this….”

This brings us to our understanding of violence in the context of capitalism. Violence, as we know, has always existed. But American “freedom” as we experience it today finds us either behind the gun or in front of it depending on our relationship with the violence of capitalism.

This country was built on a culture of violence. It started with the near-complete annihilation of the original inhabitants of this land and proceeded right up to the present when the war has come home with lethally militarized American policing of neighborhoods.

And now in his most recent tantrum, our poltroon of a president has ordered uniformed gunmen to occupy our border with Mexico, militarizing yet another humanitarian disaster.

Violence isn’t just immediate and physical. It’s cultural and systemic. It’s perennial. Gun violence is just a symptom of a deeper disease: profit-driven injustice and militarized aggression around the world — Iraq, Afghanistan, Pakistan, Yemen, Syria, Palestine, Mexico, and beyond. That violence is synchronized with the perennial violence in our communities, our streets, our workplace, our schoolrooms. If we fail to see the deeper disease and push only on surface issues like gun-law reform, we will not end the violence. Reform too, has to be tackled systemically.

Since the 1963 assassination of John F. Kennedy, more Americans have been killed by firearms in their home country than have been killed in foreign wars. There’s only one entity benefitting from the gun violence at home and the military violence abroad: the weapons manufacturers. And they have our policymakers in their pockets and holsters.

Part of the problem perhaps lies in how we view our heroes of nonviolence. Far too seldom do we discuss the force with which Martin Luther King, the last couple of years before he himself was gunned down, condemned the violence done by American arms in Vietnam and by American capitalism everywhere.

Meanwhile, we, like a growing number of people, believe that Priti’s native country’s own symbol of nonviolence, Mohandas K. Gandhi, failed to live up to his reputation when he endorsed one of the world’s most lethal forms of social exclusion — the caste system.

While the concept of untouchability — what Gandhi fought against in India — is a symptom of the disease of caste, it is not the disease itself. To fight the disease one would have to go against the grain of sacred Hindu texts that gave hierarchical segregation their blessing and were codified as law in the Manusmriti. In continuing to adhere to a caste system that does violence to millions of its people, India has remained stuck in a 2nd-century time warp—much as America is stuck in its 18th-century, 2nd-amendment time warp.

India got its independence from British rule in 1947, but the country is still waiting to get its independence from the rule of the privileged caste Hindus and their goons. Nearly a quarter of the country’s population today is at the receiving end of varying degrees of caste-related atrocities that are committed on a daily basis. Likewise, people in this country remain at the receiving end of white atrocities, also committed on a daily basis.

It’s important to bring the little-known landscape of caste violence in India to international scrutiny, because Gandhi remains a symbol of nonviolence, a fog through which the world sees India.

That’s why the world in fact doesn’t see India. The India where, for example, on February 23, Madhu, a 27-year-old Adivasi (indigenous person) from Attapadi in Kerala was beaten to death by a settler mob for allegedly stealing a little rice and chili powder.

The world doesn’t see the India that was the largest arms importer in the world from 2013 to 2017, with Russia being its largest supplier, followed by the United States.

In a recent article, William D, Hurtung elaborates in detail on the fact that for 25 out of the last 26 years the United States has been “the leading arms dealer on the planet,” and how “selling weapons to dictatorships and regressive regimes often fuels instability, war, and terrorism.” In those same years that India was the largest arms importer, Saudi Arabia was the world’s second largest importer with 61 per cent of its region’s arms coming from the United States. Those same U.S. arms supported the Saudi-led coalition campaign against Houthi rebels in Yemen that has now entered its fourth year of indiscriminate killings and has created the worst humanitarian disaster in the word today, complete with a cholera epidemic.

Saudi Arabia has been a very great friend and a big purchaser of equipment and lots of other things…. Some of the things that  have been approved and are currently under construction and will be delivered to Saudi Arabia very soon, and that's for their protection. But if you look, in terms of dollars, $3 billion, $533 million, $525 million….And that have been ordered and will shortly be started in construction and delivered: the THAAD system  $13 billion; the C-130 airplanes, the Hercules, great plane $3.8 billion.

Flash back to June 26, 1975, when two FBI agents, Jack Coler and Ron William, entered the Jumping Bull Ranch on the Pine Ridge Reservation in South Dakota seeking to arrest Jimmy Eagle, an Indigenous man, for allegedly stealing of a pair of cowboy boots. Members of the American Indian Movement (AIM) and many non-AIM people were present there. For unknown reasons a shoot-out broke out in which both agents were killed. Today in that same State of Florida, another Indigenous man, Leonard Peltier, is spending his 43rd year in prison for the shooting of Coler and William, a crime he didn’t commit.

The FBI files are full of information that proves my innocence, yet many of those files are still being withheld from my legal team. During my appeal before the 8th Circuit, the former Prosecuting Attorney Lynn Crooks said to Judge Heaney, ‘Your honor, we do not know who killed our agents. Further, we don’t know what participation, if any, Mr. Peltier had in it’. That statement alone exonerates me and I should have been released, but here I sit, 43 years later still struggling for my Freedom!

For us to understand the real meaning of freedom in this country, we have to let Peltier’s struggle for freedom guide us. That would be a start on the enormous reparations this country has to pay to all victims of America’s arms, from Yemen to Florida to Pine Ridge.

Priti Gulati Cox (@PritiGCox) is an interdisciplinary artist. She lives in Salina, Kansas. See more of her work here. Stan Cox (@CoxStan) is on the ‘Green Social Thought’  editorial board and is author, with Paul Cox, of How the World Breaks: Life in Catastrophe’s Path, From the Caribbean to Siberia.