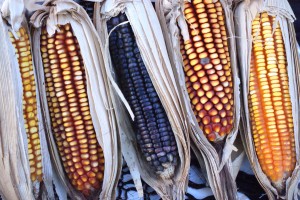 The CIP Americas Program has been accompanying the grassroots movement of campesinos, indigenous communities, consumers and scientists to maintain the ban on genetically modified corn for over a decade. The pushback from Monsanto and other biotech companies has been constant, but cross-sector organization has succeeded in protecting Mexico’s native corn and campesino livelihoods from the threat. This report describes the latest developments.

Twenty-two months ago, Mexico became a GM maize-free territory, when a Federal Judge issued the precautionary measure that suspended  authorizations to plant any genetically modified seeds of this grain, a staple food in the country, essential to its culture.

The temporary suspension reinstated in fact the moratorium on GM maize that had been breached by the federal government in 2009, when it started approving the growth of GM crops in experimental and pilot stages, continuing to do so until 2013.