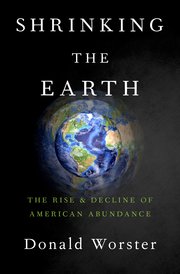 In environmental historian Donald Worster’s most recent book, Shrinking the Earth: The Rise and Decline of American Abundance, he shows how the great windfall of land, resources, and ecological bounty (a "Second Earth") that greeted Europeans when they arrived in the New World five centuries ago dramatically altered the history not only of the Americas but of the entire world. In the book and in this interview, he argues that U.S.-style capitalism and industrialism were made possible by the Second Earth’s natural abundance, and that over the past two centuries, they have in turn deeply depleted the hemisphere’s landscapes and ecosystems. America, Worster says, is going to have to shift from a culture of abundance to a culture of limits. NOTE: Turn to page 10 of the virtual print issue of CounterPunch at this link.