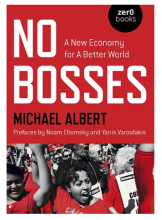 Review of No Bosses: A New Economy for a Better World, by Michael Albert (Zero Books, 2021)

For more than forty years, Michael Albert has been a tireless advocate for the left to develop a clearer and more fully articulated vision of the world we wish to create. As a founder (with his recently departed partner Lydia Sargent) of South End Press, Z Magazine, and ultimately a network of projects under the umbrella of Z Media, Albert has made the need for a more coherent long-range vision on the left a persistent recurring theme in his substantial body of work. In the early 1990s, he and left economist Robin Hahnel began to formulate a theory of “participatory economics,” a comprehensive outline for a future non-market, non-statist economy. Its elaboration has been the central theme of  perhaps a dozen books, including several coauthored with colleagues and a few written or edited by others.

Albert’s latest book, No Bosses, offers a concise, highly accessible account of participatory economics, drawing upon lessons he has accrued over the decades and addressing various critiques that have been raised, both in public settings and in print. The book may well be the best introduction yet to this approach. It has the elegance of a well-honed mathematical syllogism, combined with a conversational style that will engage readers of varied backgrounds. It is necessary reading for all who want to reach beyond the perennial exhaustion of today’s seemingly endless social and environmental crises and consider the potential for a revolutionary transformation of society.

The book proposes a coherent set of egalitarian, cooperative values, and explores their implications for transforming the nature of ownership, work, economic decision-making, and how to allocate the products of an economy no longer ruled by markets or the state. Drawing upon the work of many colleagues, Albert outlines how the same principles might apply to other spheres of life, especially politics, culture, and kinship relations, and then addresses a host of critical questions that have been raised over the years.

The core values the book articulates are likely shared by most readers here, including equitable sharing of social responsibilities and benefits, collective self-management of workplaces, the flourishing of human potentials, and the need for solidarity, empathy and ecological sustainability on a global scale. Albert then walks us through the implications of these values for several very tangible social and economic questions: How do we make decisions? How should people be remunerated? How can values from outside the economic sphere come into play? In most instances, his conclusions are compelling: people should have a say in all decisions that affect their lives; compensation should reflect the time, effort and sacrifice that one commits to socially useful work; and special considerations for one’s innate abilities or assets, productive output, bargaining power, or self-determined needs would likely conflict with the desire for a genuinely participatory self-management. The latter conclusion, of course, is only one possible answer to a question that radical thinkers have struggled with for at least two centuries, but Albert continually clarifies why he believes it to be the most ethically defensible position.

A genuinely participatory economy clearly requires profound changes in the structure of workplaces. Albert believes that many past experiments in worker self-management foundered because they failed to replace the “corporate division of labor” that has been the norm for most of the industrial era. His alternative is a system of “balanced job complexes,” whereby people are responsible for a variety of tasks that aim to balance the levels of skill and personal empowerment each person in a workplace can manifest. We will never truly eliminate class divisions in the workplace and in society as a whole, he argues, unless the current monopolization of “coordinator” roles by a subset of the population can be curtailed. Albert emphasizes that a considerable majority of people today are working well below their full capacity for creativity and satisfaction, and this breeds further alienation and habits of subordination. The answer, he suggests, lies in a better balancing of responsibilities both within and across workplaces.

The question of earnings, of course, is a central one in any economic arrangement. Under capitalism, we know that the ownership of capital gives some individuals a vastly disproportionate share of total income. Since the origins of western socialism, people have debated whether people should earn according to their effort or solely according to their need. The labor movement has added the factor of bargaining power into the equation, but Albert suggests that remuneration on the basis of bargaining power can encourage a kind of gangsterism. His preferred alternative is that people be compensated solely on the basis of the “duration, intensity and onerousness of socially-valued work” that they perform, as determined by fully participatory workplace committees. It is a clear departure from the classic egalitarian principle of “to each according to their need,” which according to Albert would make it difficult to assess genuine needs and develop a rational system of allocation. While he agrees that certain social goods like healthcare and education should indeed be free for all, he views differential earnings on the basis of his three core criteria to be the most equitable alternative.

One of the most unique and admirable aspects of Albert’s system is his firm rejection of both markets and central planning as systems for allocating social outputs. While these are controversial positions in many circles – and even Yanis Varoufakis’ preface to the book expresses some skepticism – Albert makes a compelling case that markets breed competition, acquisitiveness and a pervasive social dissatisfaction, while planning inevitably privileges a class of “coordinators,” who compel an unhealthy level of subservience and compliance to their mandates.

About a quarter of the text here is devoted to elaborating Albert’s proposed alternative to markets and central planning, described as an iterative system of “participatory planning.” Essentially, a national facilitation board serves to weigh proposals from consumers and workers, as filtered through local and regional councils for each, and engages everyone in a multi-stage, participatory process of reconciling their various needs and desires. The goal throughout is to preserve the core principle of everyone participating in economic decisions that affect their lives. Prices only exist as indicators of progress toward an eventual consensus position. One of Albert and Hahnel’s early books even offered a mathematical model aimed at demonstrating the feasibility of such a process converging toward an optimal outcome, but many questions still remain: How thoroughly can people anticipate their needs for the coming year, especially in the case of services as opposed to tangible goods? How can qualitative concerns that are not readily reducible to mathematical formulas or algorithms be fully incorporated? What happens in the case of substantive conflicts among legitimate social needs and desires? And in these days of increasing at-home work, subcontracting and global supply chains, it seems more important than ever to ask, what about goods and services that are not produced in conventional workplaces?

Albert believes he’s mostly addressed these issues in his extensive writings over the years, but that doesn’t fully come through here, even as he emphasizes that his proposals are a scaffold rather than a blueprint. He suggests that, “[i]f an economy functions perfectly, its prices will take into account the full effects of both the production and the consumption of inputs and outputs.” But is such a perfect economy possible, even in principle? Albert reminds us that “[r]eal people’s preferences arise in social interactions,” but how are those ongoing conversations fully incorporated into the proposed model? The chapter that outlines the ways this approach can help advance liberatory models of politics, kinship, and other areas of life raises even more questions.  Most notably: Should economic arrangements continue to be foregrounded to this extent in our overall vision for human liberation? Are we bound to always be divided between our roles as workers and “consumers” of economic goods? What of the economic historian Karl Polanyi’s ideal of re-subordinating economics within broader social and cultural values rather than allowing it to continue to dominate our lives, as it has since the origins of capitalism? Is politics a subset of economic relations, or should it be the other way around? The literature on participatory kinship relations has evolved quite substantially through the work of Lydia Sargent and several feminist colleagues, but how might the feminist ethics of care be moved to the center of social relationships rather than continue to be subsumed by economic considerations? Albert suggests that it’s fine for others to focus on such questions while he continues to elaborate the economic vision, but I’m not convinced this is sufficient to overturn 200 or more years of economics dictating the terms of our lives.

All these particulars aside, Mike Albert’s No Bosses remains an important and illuminating contribution. In a time of upheaval and uncertainty like ours, Albert continually urges us to refocus on core values and to persist in imagining social arrangements that are vastly different from the ones we’ve all grown up with. The more we follow such an approach, the better prepared we’ll be to respond to future social and economic disruptions with a sense of purpose that reaches beyond the ever-pressing needs of the present. While readers may end up with some answers that are substantively different from what Albert proposes here, the most important thing is to appreciate that another world is possible, and the more we think about such revolutionary possibilities, the more plausible it is that at least some of our transformative visions will someday come to pass.

Brian Tokar is a lecturer in Environmental Studies at the University of Vermont and a faculty and board member of the Institute for Social Ecology (social-ecology.org). His most recent book, co-edited with Tamra Gilbertson, is Climate Justice and Community Renewal: Resistance and Grassroots Solutions (Routledge 2020: https://www.routledge.com/Climate-Justice-and-Community-Renewal-Resistance-and-Grassroots-Solutions/Tokar-Gilbertson/p/book/9780367228491).